Totally chuffed that the piece I wrote two weeks ago won the song contest at the Northeast Filk Convention.

This is really special, since it was four years ago this weekend that I attended my first filk con—NEFilk—at the suggestion of Merav Hoffman who pulled me aside at Arisia and said, hey, did you know there are whole cons devoted to filk? I hadn't.

Link to the song on Bandcamp and a cheap and cheerful music video on YouTube.

Heaven/is falling
The angels/lie on sidewalks in the rain.
The serpent/calling
Up from the lost world/buried deep within our brain.
And the saints have piled up in the streets
Their sacred blood staining the sheets
Their halos and bones have been sold
Pried loose before the bodies were cold
And the Rainbow disappears with the dawn
And there's nothing left to carry us on
And there is no salvation to be found
Now that Heaven's underground.

Darkness/descending
Unending/as the chaos runs its course.
We grind on/pretending
Nothing/left us but remorse.
And the voices that speak in our dreams
Offer comforts as cold as they seem
As faces fade off into noise
And the lost take the Hand that destroys
And there are no stories left to tell
Now that Earth inhabits Hell

Bridge
It's forever
and it's worse than it appears.
This brave new world
is just the sum of all your fears.
And each day
follows senseless on the last.
With no way
out of the demon haunted past...
(Spoken: "Dingir.Pazuzu Qatu Dingir.Ishtar")

The Heroes/are dead now
Their bodies/scattered ashes in the deep.
The Prophet/unread now
In the sound and the fury of reason's final sleep.
And all along the roads to the Dome
the dead appear to carry us home
and the angels have begun now to rise
their screaming held back in the skies
and the world is just the walls of a cave...
As we look up the sides of the grave...
And there is no salvation to be found
Now that Heaven's underground 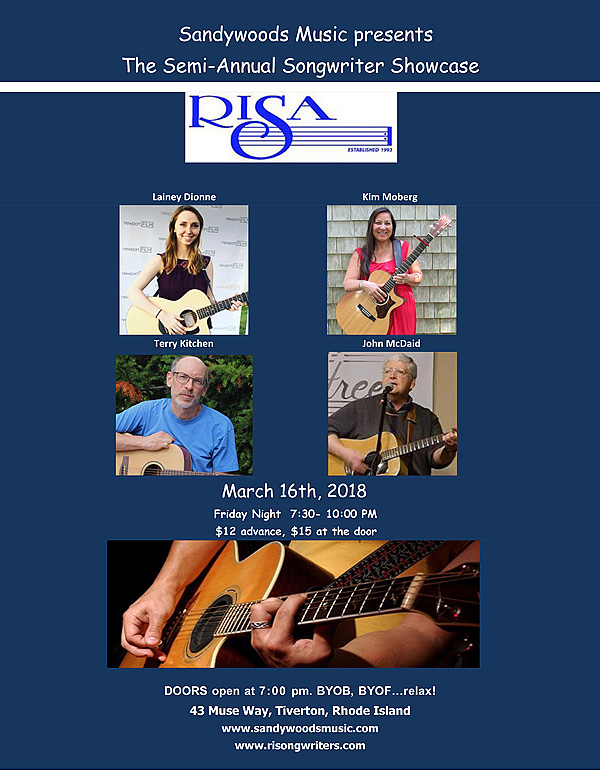 On Friday, March 16, I'll be playing at Sandywoods in Tiverton in the Rhode Island Songwiters Association semi-annual showcase, along with the awesome musicians Lainey Dionne, Kim Moberg, and Terry Kitchen. Sandywoods is a super-cool venue where you can BYOB/BYOF and have a great time listening to these singer-songwriters I'm thrilled to share the stage with. Doors at 7pm, tickets $15. 43 Muse Way, Tiverton, RI, 02878. This will be a fun evening!

New England's "state fair," the Eastern States Exposition (aka, The Big E) kicks off in Springfield, MA soon, and I'll be one of the two dozen local singer-songwriters featured at the Rhode Island building. I'll be playing two 45-minute sets of original tunes, at 2 and 5pm on Friday, September 22, and at 1, 3, and 5pm on Saturday, September 23.

The RI Songwriters Association (RISA) stage will be set up right inside the door of the Rhode Island building on the Avenue of States. You'll want to come early and make a day of it (you'll also want to come early to avoid the traffic, which I've been told can back up as the day goes on.)

I'm delighted to have this opportunity to play alongside some of the best local musicians. A big thank you to RISA and RI Commerce, for this chance to entertain the thousands of folks who visit the Big E every year.

I'll be doing the feature performance at the Sandywoods Center for the Arts in Tiverton, RI, on Tuesday, April 25 at the open mic hosted by Gary Fish. My 40-minute set starts at 8pm (doors open at 7). No cover, BYOB/BYOF (pass the hat). And here's a new song I'll be doing that I wrote for the Rhode Island Songwriters Association (RISA) Songwriters in the Round. It's called (Time to) Face Facts, And it doesn't even invoke Kellyanne Conway (until the fourth verse...) Enjoy! 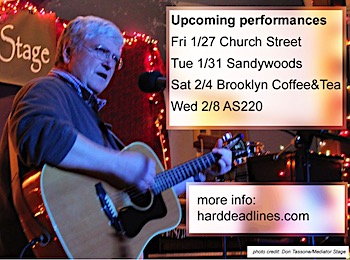 Here's the details on my upcoming gigs in Warren, Tiverton, and Providence. I'll be playing a set of original folk tunes (and at AS220, a brand new song written for the occasion!) There's a venue for every part of the state and schedule — both weekinights and weekends. Hope to see you there!

Thanks to Don Tassone of Mediator Stage for the photo!


Wednesday, Feb 8
RISA Songwriters in the Round
RI Songwriters Association. Doors open at 7pm and four singer-songwriters each perform three songs, with the second one written in the last month on the theme "Time to face facts"
AS220
115 Empire St Providence, RI
$5 admission
Bar and food available
venue | map | event info


Want to check out and maybe download some tunes? Right this way...

Saturday, 12/4
FotLR Fundraiser for Fallon Vahani
Bells of Peace
Light At The End
Checkout Time at the Owl Creek Hotel
Ellipsis
Love On The Moon