Bill Rosen was a talented singer-songwriter, a brilliant, funny guy, and someone who cared deeply about others. This week, in San Bernardino, my college friend was murdered in the parking lot of an apartment complex where he was staying. There was an ambiguous but worrying post on his Facebook page, and when I reached his cousin, she gave me the terrible news.

Bill's murder showed up in local news items as just another crime story: San Bernardino County Sun, KABC TV. I hadn't known Bill's circumstances for a while; thanks to the false sense of transparency of Facebook, it seemed everything was going okay.

We had done theater in college, back at Syracuse University. We'd jammed together on guitar and shared enthusiasms for Loudon Wainwright and Steve Forbert. I still remember one afternoon in the summer of 1979, he pointedly played me "Thinking'" from Forbert's "Alive on Arrival" when he estimated that I was being particularly obtuse about something. He was the kind of friend who would do that. He told me that I needed to up my guitar playing in no uncertain terms, and I owe him. Because he then started showing me how to do hammer-ons and pull-offs. It's a rare friend who can tell you difficult truths in a helpful way.

We lost touch for a while after college. I bumped into him in Greenwich Village in 1982; I was on my way to a gig and carrying my guitar and we chatted for a while. Then we lost track of each other again. That was easy to do in those days, before the web and Facebook and mobile phones. A long gap. Then, out of the blue, in 2005, I got an e-mail saying that he'd looked me up and found my web site.

He was doing corporate communications at the Multiple Sclerosis Society, and I was periodically working out of an office in NYC, so we got together for lunch a few times. Usually al fresco in one of the vest-pocket parks in the East 50s, over bagels or sandwiches. He was the same Bill -- a bit older, a bit road-weary and dented here and there by life as we all end up being in our forties. Over lunches, he shared his story. He had tried to make it as a musician, lived in LA, wrote and recorded demos, and come close. But there are just a lot of folks aiming for a very limited number of slots in the fame machine. Even in giving up on that dream, though, he netted a wonderful story. I'll let hime tell it, as he shared in an e-mail: 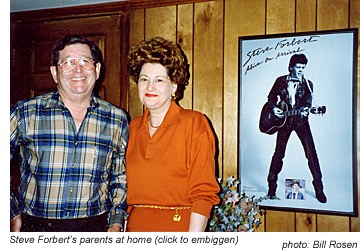 Here's a quick Forbert story: I lived in L.A. for 5 years (the 10 longest years of my life!) pursuing a career in music. (Things went well, but not fast enough for me, so I bagged it.) After letting go of the dream, I made my way back home, driving cross country in an 18-foot Ryder truck. On our way back to NY, my girlfriend and I were driving though Meridian, Mississippi (Steve's childhood home), and, after a series of phone calls, located Steve's parents and stopped in for a visit - pulling up in our 18-foot truck. (They probably thought we were there to clean out the house.) 5 minutes after getting there, and sitting in the den watching Mr. Forbert read the newspaper, I turned to my girlfriend and mouthed, 'What the fuck are we doing here?' Shortly after that Mrs. Forbert brought out a tray of Gaucho cookies and Coca Cola and the conversation took off - no doubt due to the half-pound of sugar we all powered down. 4 hours and countless photo albums of Steve as a child later, I finally had to insist that we had to hit the road. All in all, a nice visit. I exchanged Xmas cards with the Forberts for several years afterwards. A few years later, I met Steve following a show at the Bottom Line and I mentioned this story to him and asked if his parents had ever mentioned it to him. They had. But he was far from impressed. If anything, he reacted as if I were a lunatic. Oh well.

We carried on an e-mail conversation for a couple of years, and we talked about music and shared a few tunes back and forth. Here are two of his songs I particularly admired. Here's how he pitched them...

As for my music, much of what I was writing back at Syracuse was folk-rock, with a heavy emphasis on the lyrics and no emphasis whatsoever on the music. Music was nothing more than a vessel to carry the lyrics. I never really abandoned folk-rock, but my music evolved (or devolved, depending on your point of view) into rock 'n' roll. Attached is the first of two songs from the late 80s along along with lyrics. I’ll send the second in a separate email. Both were recorded in my home studio. I'm playing all the instruments and doing all the vocals.

This one is "After All," and you can see the lyrics here.

And this next one is my favorite Bill Rosen tune, "Never Have Time for it All." It is a truly great song, and Bill knew it. So, apparently, did other folks in LA, as he told me in an e-mail...

'Never Have Time for it All' was going to be my 'meal ticket.' A half-dozen different artists were interested in recording it; it was going to be the theme song for a show on NBC; it was going to be included on the soundtrack of no less than three films. Lots of promises, but in the end, none of them happened. Such is show biz.

Here's the song, and the lyrics.

And here's how he explained how the song came to be...

I wrote 'Never Have Time...' a couple of years after 'It's the End of the World...' and a year or so before 'We Didn't Start the Fire.' Of course, by the time mine was getting heard, there were some who thought I had ripped off Billy Joel. There's that 'timing is everything' thing again. In truth, it wasn't supposed to be a song and I certainly didn't model it after anything. I was laid up with a pinched sciatic nerve for a few weeks and I simply made a list of all the things I had said over the years that I wanted to do in my life. When I was all done, I had this completely ridiculous list of things, many of which I'd never live long enough to do and realized 'Hey, this might work as a song.' But in order to get it all in under 4 minutes, I had to speed up the delivery. (YAWN) And that's the completely uninteresting story behind the song.

I feel so sorry that Bill never had time to do more of the things he wrote about. I will miss his quick wit and clever turn of phrase. His wonderful music. I will mis his grit and optimism. Even after being laid up following a horrible bike accident, and the loss of his parents, this summer he got a tattoo with Seamus Heaney's last words, "Noli Timere" (Latin for "Be not afraid, as Heaney texted his wife following his heart attack.) But mostly, I will miss knowing that somewhere, out there on the other coast, was a king-hell guitar player who would always tell it like it was and be a true friend. I will miss you, Bill.

Here's a picture Bill took during the August, 2003 blackout of the Northeast US, You can see the original on "Astronomy Picture of the Day" for August 18, 2003.

Editorial note: This has been a tough post to write. I wish Bill's family and friends peace and healing, knowing just how difficult those are in these awful circumstances.