Heaven/is falling
The angels/lie on sidewalks in the rain.
The serpent/calling
Up from the lost world/buried deep within our brain.
And the saints have piled up in the streets
Their sacred blood staining the sheets
Their halos and bones have been sold
Pried loose before the bodies were cold
And the Rainbow disappears with the dawn
And there's nothing left to carry us on
And there is no salvation to be found
Now that Heaven's underground.

Darkness/descending
Unending/as the chaos runs its course.
We grind on/pretending
Nothing/left us but remorse.
And the voices that speak in our dreams
Offer comforts as cold as they seem
As faces fade off into noise
And the lost take the Hand that destroys
And there are no stories left to tell
Now that Earth inhabits Hell

Bridge
It's forever
and it's worse than it appears.
This brave new world
is just the sum of all your fears.
And each day
follows senseless on the last.
With no way
out of the demon haunted past...
(Spoken: "Dingir.Pazuzu Qatu Dingir.Ishtar")

The Heroes/are dead now
Their bodies/scattered ashes in the deep.
The Prophet/unread now
In the sound and the fury of reason's final sleep.
And all along the roads to the Dome
the dead appear to carry us home
and the angels have begun now to rise
their screaming held back in the skies
and the world is just the walls of a cave...
As we look up the sides of the grave...
And there is no salvation to be found
Now that Heaven's underground 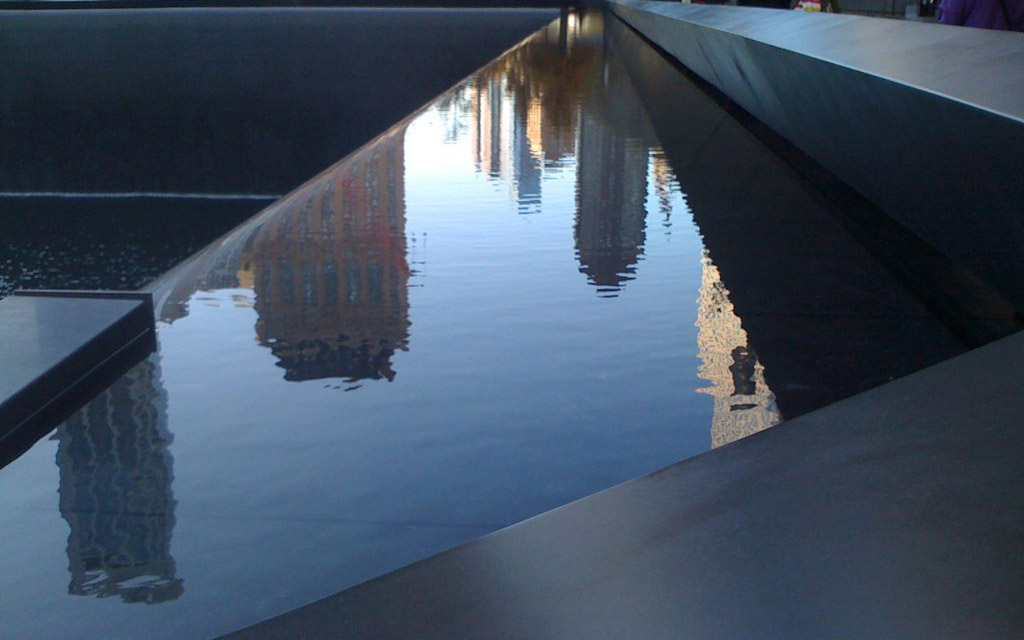 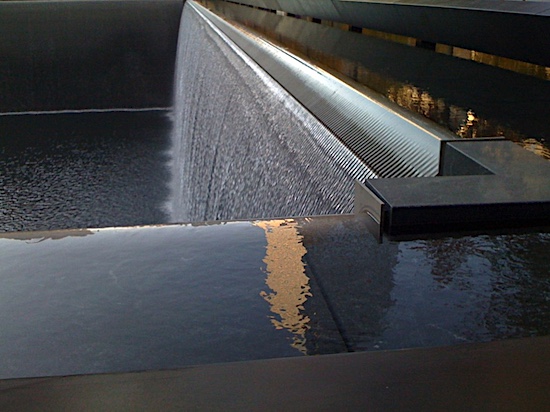 The Weir and the Void. 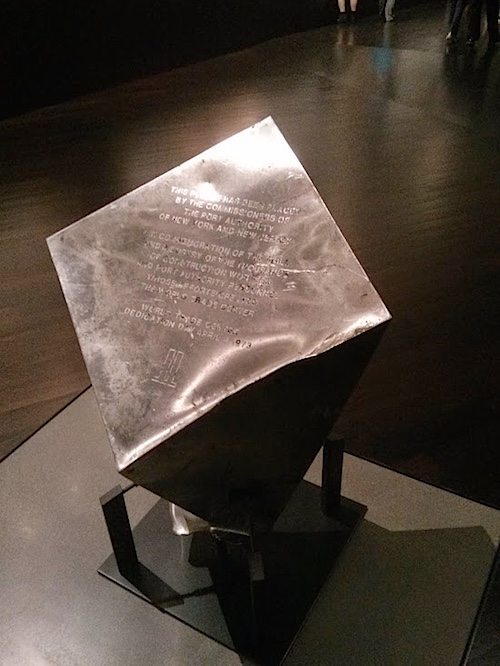 Slurry wall at the World Trade Center; you can read the story behind it here. 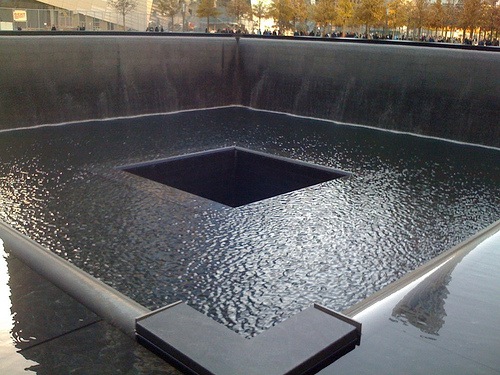 Please keep in your thoughts today those who lost their lives in New York, Washington, and Shanksville, and especially the heroes from the NYFD, NYPD, and Port Authority Police.

You can read more words written in prior years here.

September 11 blew a hole in America's psyche, and we have, since, seen laid before us by the angels of our best and worst natures two possible paths through that emptiness: the police state and the autonomous zone. Nowhere (and at no time) has this ever been more visible than right now in lower Manhattan, where my 12-year-old son Jack and I spent last Sunday morning visiting Occupy Wall Street and the 9/11 Memorial.

You approach the Memorial from the north, since your experience begins long before arrival, filling out forms online for a reservation. You have to provide your contact information and schedule a time, then appear with valid identification to print your visitor pass at a storefront on Vesey street, seven blocks from the entry. Your non-transferable pass has your name, bar code, and entry time, and also the rather spooky disclaimer, "Holder voluntarily assumes all risks incidental to attending the 9/11 Memorial."

The map they hand you with your tickets suggests you walk down Church street, and I suspect it was drawn long before the Occupy Wall Street, since it takes you right past Zuccotti Park, where Jack and I stopped.

The first thing you see is the police cordon; from a block away, you can spot the portable white observation tower, then the Broncos. Then you notice the milling tourists, already beginning to dot the streets at 8:30 on a Sunday morning. You come around the corner of Liberty street, and there it is: the Occupation. Tourists are snapping from behind the steel barricades with telephoto lenses.

The first impression is a sea of blue tarps and tents below a low line of trees, dwarfed by the enormous office buildings on the sides, a tiny nomadic encampment set amid Bauhaus mountains. The tents are packed thick, cheek-by-jowl, not spread out like Providence, and narrow pathways snake into the interior. Orange banners announcing service areas poke up around the park -- Food, clothing, facilities, library. When Jack saw Occupy Providence, he said it reminded him of the city-states of Sumer he was learning about in social studies. OWS, he says, looks more like a big city.

We wander through this city as it is just waking up. People are clustered at the food tent, sipping coffee. A guy sits nearby feeding a pigeon. The clothing tent looks like a thrift store, racks full of coats under the awning and boxes of gloves, scarves, and other cold-weather gear out front. A black terrier pokes its head out of a box. People smile and nod. The library has boxes of books piled along the ledges around a planter, and a couple of people already sit reading. It's completely welcoming and non-threatening.

At the info tent we stop to chat, and they're thrilled to hear that we're from Providence. Jack tells them he voted in the General Assembly and we get handshakes. We talk about the actions and arrests going on across the country. A car pulls up with a back seat full of donations; people coming out with support even on this chilly Sunday morning. We say thanks and move on.

One block south, and a block west, on Greenwich, we enter a different world.

This one begins with concrete jersey barriers and cops, lots of them, directing people. You approach the 9/11 Memorial through a gauntlet of police checkpoints where your admission pass is inspected. First, just to get into an enormous open-air staging area, with a maze of steel barricades set up to snake a line boustrouphedonic across the end of a city block. But we're here early, so we straight-line to the second checkpoint, two security guards doing flow control for entry into the screening area. Jack has already started counting the bulbous spy cameras strapped to light poles.

Then it's an airport-style security room, lots of police, and 8 lines running through magnetometers. They asked me about my Cyrillic Soviet-era good luck coin, as they often do at airports, and they made me open my wallet so they could look inside. Once you get your belt back on, you cross Washington Street (they check your pass three more times) and you finally queue up inside a broad concrete cattle pen that runs along West Street. Jack has stopped counting cameras when he got to a hundred.

When you are released into the memorial plaza, you step past the barricade and suddenly see trees and emptiness, and you hear it, the low roar of falling water.

You are in a long, low plaza, and beneath the turning leaves of the swamp white oaks, people are drawn, magnetically, to the low metal parapets, almost 200 feet on a side, that mark the location of the towers. You can hear the waterfalls before you see them. As you approach the pools, you are struck first by the sheer size of these holes, with water pouring over the lip and disappearing below, and then, as you reach the panels with the names, you look down and see the lower reflecting pool and the second waterfall into the square void in the center.

Even for someone who grew up in New York and saw the World Trade Center all my life, the size is still stunning. When you walk around the perimeter, you are still, by design, within the footprint of the Towers, and it gives you a visceral sense of just how big they were.

The low bronze panels, with names packed as closely as the tents in Zuccotti, remind you of why you are here: this is a cemetery. So many names. You can't take them all in at once; they blur into distance, but as you walk along each side, you read them. You notice what appear to be families, here and there. You can't help but see the enormous ethnic diversity of New York, reduced here to mute syllables.

Jack walks between the corners of the pools, measuring the distance with his feet and recalling Philippe Petit, from one of the favorite books from his childhood, Mordecai Gerstein's The Man Who Walked Between the Towers. He looks up at the height of One World Trade and tries to imagine what it must have been like to step out on a wire at the top of the world.

No matter how many people mill about the plaza, it still feels remarkably empty; you are never far from either of the two dark bronze parapets, which are curiously evocative. They feel like shared headstones, over which you peer past a rippling, watery curtain into an open grave. They are beautiful and horrifying and majestic and unexpressibly sad.

The contrast embodied in Lower Manhattan is almost too simple to name: the emergent life of Zuccotti, the emptiness of the Memorial. An older, modernist age would have perhaps tagged them Eros and Thanatos, the forces of life and death. And it is no accident that our existing cultural mechanisms produced the latter: years of legislative gridlock, legal wrangling, political infighting, egos, money, and city politics buffeted the Memorial, until finally the looming threat of the tenth-year anniversary cracked the rusted nut of politics-as-usual. And you can see how barely they made it; just to the side of the Memorial plaza, chain-link fencing still holds supplies and construction equipment for the Museum, yet to be opened, beneath the plaza level.

Our current democracy is very good at building cemeteries. And still, it took them ten years.

The Occupiers have been in Zuccotti less than two months — just a few days after the Memorial opened — and they have already built a working culture, a powerful new human-scale, consensus-driven General Assembly that can respect diversity and reach decisions, and inspired thousands across the country to spawn local instances.

That does not imply a value judgment; life and death are both part of the same Wheel, yoked together in the turning. It's when they are driven out of balance that society begins to sour. And no surprise that something as agonizing as 9/11 drove us, as a culture, to the edge of madness: a decade of pointless war, torture, xenophobia, frantic speculation in housing, repackaged to impossible abstraction, building Babel-like to total collapse (An unwitting performative re-enactment of the fall of these transcendent buildings that leave such voids in the skyline?) until we are left with nothing but Fear and Panic and the voluntary surrender of civil liberties (when was the last time you had to take off your belt to visit a cemetery?)

The late media theorist Neil Postman used to say that there's no such thing as a dead metaphor, and I think of that when I consider the word: cemetery. It comes from the ancient Greek koimeterion meaning sleeping place, as in dormitory. There is something deeply evocative in the act of the Occupiers expressing their free speech through sleep, though the elementary act of posessing the ground overnight and rising up again. Not, however, as the zombies that populate our collective unconscious, but as authentic, whole humans; aware, engaged, and unafraid. It is, in a sense, an unmaking of the metaphor, turning the cemetary back into a sleeping place, into a new culture awakening from a dark dream.

Like the Occupiers, I am able to look with hope at the world we are waking into.

Editorial note: This is the first time I've been able to bring myself to visit Ground Zero, and it was still an overwhelmingly sad experience. I have the greatest respect for this space which, in a very real sense, is a burial ground. All I'm trying to do here is process the juxtaposition of these two realities. I would recommend that anyone who possibly can should visit both for yourself; there really is something unique happening at this moment in Lower Manhattan.