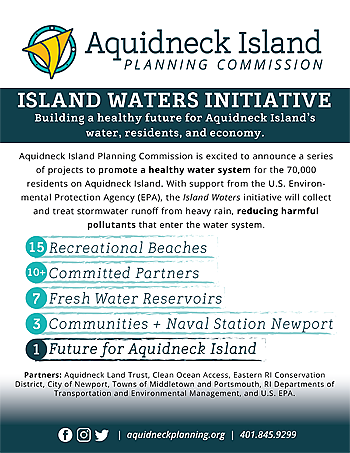 With support from the U.S. Environmental Protection Agency (EPA), AIPC is anticipated to start breaking ground on a series of projects beginning in Spring 2019. Island Waters intends to promote a healthy water system for the 70,000 residents on Aquidneck Island. According to John Shea, AIPC Executive Director, the goal of the Island Waters project is “to work with the communities and residents of Aquidneck Island to protect and improve the quality of our water system.”

Rhode Island Department of Health (RIDOH) closes recreational beaches when fecal bacterial levels are too high. Over the past five years, beaches on the island have been closed an average of 12 days per year during an approximate 100 day beach season and according to RIDOH, “some beaches in Rhode Island may see 10,000 visitors in a single day.” By improving the health of waters, Island Waters will encourage tourist beach traffic, boosting the economy and public health.

AIPC’s Island Waters partners include Aquidneck Land Trust, Clean Ocean Access, Eastern RI Conservation District, City of Newport, Towns of Middletown and Portsmouth, RI Departments of Transportation and Environmental Management, and U.S. EPA. The mission of AIPC is to preserve and improve the environment, economy, and quality of life on Aquidneck Island.