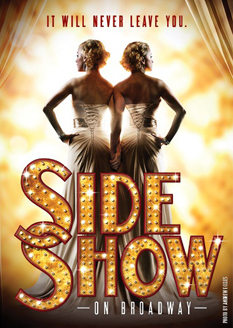 Back in 1997, the musical Side Show, based on the life of conjoined twins Violet and Daisy Hilton, ran for just 91 performances on Broadway, but received four Tony nominations and created a devoted following. Now Side Show is back, in a dazzlingly theatrical reboot at the St. James Theatre, directed by Academy Award winner Bill Condon and featuring a rewritten book and new songs by Bill Russell and Henry Krieger.

The Hilton twins occupied a weird cultural niche in the 1930s — abandoned as infants in the UK, they were exploited as a curiosity, brought to the US by their manager, toured in vaudeville as a musical act, and eventually appeared in Tod Browning's infamous film Freaks. The revived Side Show offers a deft, compelling biography of Violet and Daisy's challenges that illuminates fundamental human issues of acceptance, othering, and the fraught duality of attachment and escape.

Every moment of show — the majority of which is sung — is packed with bravura performances from an excellent ensemble cast, and intense, vivid theatrics. Krieger (Dreamgirls) displays a gift for haunting motifs, and paired with Russell's clever, twisty lyrics, provides a richly complex score that bears repeated listening. A new cast album is in the works for early in 2015.

The opening number, "Come Look at the Freaks," is a marvel of prosthetics and makeup as we meet the members of the sisters' traveling show: Dog Boy, Three-Legged Man, Human Pin Cushion, Bearded Lady, two Cossack little people, a Lizard Man, the Cannibal King, and "Sir," the sisters' owner and manager. A recent Wall Street Journal photo essay captures the amazing special effects, which were stunningly effective even from the front row.

Erin Davie as Violet and Emily Padgett as Daisy offer utterly riveting performances. It is difficult to imagine anyone pulling off such a span of complex, synchronized movements, but they make it look effortless. Davie is tragically compelling as the introverted Violet, complemented by Padgett's brash Daisy. Together — and they are almost always joined at the hip, aside from a few startlingly effective frame breaks — the pair offer a heartbreaking character study. The 11-o'clock number, "I Will Never Leave You," is a beautiful ballad that was featured on the 1998 Tony broadcast. Their end of Act I duet, "Who Will Love Me As I Am," is an aching lament that will reduce you to tears, even in recollection. You have been warned.

Ryan Silverman as Terry Connor and Matthew Hydzik as Buddy Foster are wonderful as the would-be impresario and song-and-dance man who coax the sisters to move to vaudeville. Their complex relationships — Terry with Daisy and Buddy with Violet — provide much of the energy and tension. Silverman's darkly introspective internal fantasy "Private Conversation," and Buddy's over-the-top vaudeville number "One Plus One Equals Three" could not be more different, yet both perfectly capture the inner lives of this duo caught in the orbit of the sisters.

Another fine thematic doubling is offered by David St. Louis as Jake, the freak show African "Cannibal King" who makes himself the sisters' protector and Robert Joy as the heartless "Sir" who literally owns them. Jake's soulful warning about leaving the show, "The Devil You Know," comes as the sisters struggle to free themselves from Sir's protectorship. Joy's creepy, malevolent Sir contrasts beautifully with St. Louis's nuanced performance as stalwart ally and friend. "I wasn't always the king," he notes in a moment of mordant humor. "I had to eat my way to the top." His confrontation with Sir in the court battle to free the sisters is a rich, dramatic moment.

The courtroom, like the rest of the show, is executed within David Rockwell's spare, elegant set, comprising mobile structural pieces augmented with bold, clever banners. The lighting, by Jules Fisher and Peggy Eisenhauer combines unobtrusive effectiveness with bravura effects (the "Private Conversation" sequence is a real standout.)

Without having seen the original production, it's difficult to quantify how much Bill Condon's direction and additional book material shaped the show, but the result is nothing short of magical. Right from the opening number, the audience is immersed in a richly imagined, thoroughly compelling vision, executed to the highest technical standards. Whether it's the terrifying shadow doctors in a childhood flashback, the appearance (and disappearance) of Harry Houdini, the romping vaudevillian numbers, or the eerie final sequence with Tod Browning, Condon surprises, delights, and chills the audience. And the book and music are just a continual delight. Krieger and Russell have tweaked the original material and composed several new numbers that are wonderful additions.

Side Show is not really about "freaks," unless it's about the way in which all of us experience the isolation of being alive in a world of difference. It is ultimately, and beautifully, about the things that connect us to each other as people — literally embodied as blood vessels and tissue for the sisters — and the continual challenge of growth and autonomy.

This is a dazzling, high-impact revival of a wonderfully, deeply human show, and an absolutely engrossing theatrical experience. You will come away changed. Highly recommended.

Editorial note: Review based on the preview performance on Saturday, Nov. 15. I paid for my tickets and did not receive anything of value in exchange for this review, although I did get to meet Bill Russell afterward and gushed like a fanboy.

Update, 12/12: After weeks of less-than-stellar ticket sales, Deadline.com reported this morning that the show is set to close Jan 4, 2015. I feel bad for the whole creative team (the Times had a good piece on how the revival came together; Broadway.com had a cool video) and depressed by what this says about Broadway as an institution.