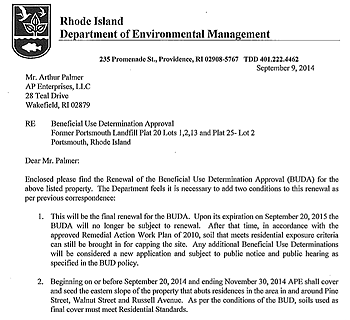 The RI Dept. of Environmental Management has issued a response to a plea for more time from the company capping Portsmouth's former town dump, and while they have granted the request for a one-year extension, they stress that this is "final" and have required immediate action to complete the finished sections, according to documents released by DEM today.

In the letter to Arthur Palmer Enterprise, DEM Principal Environmental Scientist Mark Dennen advises APE that although they are granting the extension to the governing agreement, the Beneficial Use Determination Approval, DEM "feels it is necessary to add two conditions."

First, that there will be no further extensions "Upon its expiration on September 20, 2015, the BUDA will no longer be subject to renewal." Dennen notes that any additional request for an extension "will be considered a new application and subject to public notice and public hearing." (The significance of that sentence will not be lost on the APE team, who, like DEM, had to sit through many uncomfortable meetings at the Portsmouth Town Hall over the last few years.)

Second, DEM is requiring immediate work to bring the already completed sections of the site up to final condition with residential soil and grass cover. "Beginning on or before September 20, 2014 and ending November 30, 2014 APE shall cover and seed the eastern slope of the property that abuts residences in the area." This is a rebuke to APE, who had responded to DEM's prior request for immediate action with a proposal to begin the final cover work in six months.

In addition to the response, DEM also distributed a letter written by the president of the Portsmouth Concerned Citizens, Larry Fitzmorris, and a letter and petition with 58 signatures from former Town Council president Joe Robicheau. Both complain of alleged health risks and other impacts on the neighborhood and urge the DEM to reject the extension.

DEM responded with a by-now familiar correction of several misstatements which you can read here.

Editorial note: Sure seems like someone thinks they can wring another election cycle's worth of Island Park anger out of this issue. I, personally, remain unconvinced. But in the interests of full disclosure, long time readers may recall that Mr. Robicheau and I had a significant disagreement about the responsibilities of the Town in communicating with residents of our uniquely fragile neighborhood in the runup to superstorm Sandy.