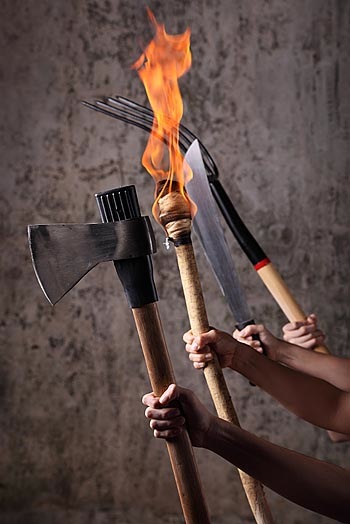 Over the past three years, as a private company has been capping Island Park's former town dump, the local torch-and-pitchfork crowd has repeatedly fired off complaints at the RI Dept. of Environmental Management full of factual errors and misinformation (see previous coverage). On Friday, RIDEM responded to the latest screed from the ominously named "Landfill Committee" with a restrained and predictable fact-based spanking.

Here's a sample (black text is the complaint, red is the DEM response):

The homes on the North End of Russell Avenue (West side), are presently bordered by the cap on two sides, the West and South sides. When the cap is expanded, the homes shown on the map on the West side of Russell Avenue will be surrounded by hazardous waste on three sides by the landfill.

The Department’s regulations require that all fill material be covered and closed as the landfill was found to have exceedences of the Department’s standards for a number of contaminants. That residential properties are surrounded by this landfill speaks to how important it is to cap and close this site.

As the Department has repeatedly stated on many occasions that hazardous waste is legally defined and strictly regulated by both the United State Environmental Protection Agency and the Department’s Hazardous Waste Regulations [the most recent version became effective 2/10/2014]. The USEPA also specifically defines the term but the state rules are more stringent. The  Department does not now, nor has it ever permitted hazardous waste to be accepted at the site (the original landfilling activities at the site pre-date the Department’s existence). To dump hazardous waste at this or any other unpermitted site could result in significant civil and/or criminal penalties on both a state and federal level.

The Department has required extensive sampling as well as conducting its own split sampling of material accepted at the site to ensure no hazardous waste or soils in excess of its Site Remediation standards are accepted. There is no indication that hazardous wastes were ever accepted as part of the closure activities. This data has been published on the web site and interested parties were notified.

The property on the corner of Highland, Pine and Russell stated on the map as undeveloped, is currently being developed.

The Department was not aware that these roads were proposed for development. This is of concern because the undeveloped portions of Pine Street, Russell Avenue and perhaps Walnut Street are underlain by portions of the landfill that have not been studied or sampled. Its source is believed to be identical to landfill material on the APE property that contains hazardous materials. Construction of a road or buildings on fill material could create significant health concerns and we will contact the Town on this issue.

If I were the developers of that property, I'd certainly be thanking the "Landfill Committee" for bringing this to DEM's attention.