This weekend is my favorite sf con, the always awesome Arisia in Boston. It's got something for everyone — sf, fantasy, print, film, anime, cosplay, music, the whole waterfront. By coincidence, it's at the Westin Waterfront, right next to the convention center. It's a full weekend of delightful geekery with all of the region's fandoms. I wouldn't miss it for anything.

I'm on a couple of panels (I'll also likely be hanging out in the filk room late into the night.) If you're gonna be there, hope to catch up!

Saturday, 7pm
Another Look at the Bad Old Days
Hale (3W), 7pm - 8:15pm
Jonathan Woodward (moderator), James Hailer, Heather Urbanski, Sarah Lynn Weintraub, John G. McDaid
A lot of SF has aged very badly. A lot of it bore appalling elements even for its time. There's some usual suspects, but let's look at the older works of SF with awful elements as a whole. Is there anything worth looking for in those stories? Who deserves to make problematic fave among the problematic horde? Are there lessons that are relevant to modern readers and authors to be found among the stories that make us wince?

Saturday, 8:30pm
The Prisoner at 50: Be Seeing You
Douglas (3W), 8:30pm - 9:45pm
Mark L Amidon (moderator), John G. McDaid, Michael A. Burstein, Justine Graykin, Jared Walske
Fifty years ago, *The Prisoner* helped redefine the spy genre and bring various counterculture themes of the '60s to the forefront in a groundbreaking science-fiction show. Attempts at reboots -- an '80s comic and a 2010 AMC series -- have failed to capture any of the magic of the original. What keeps this classic show so popular after so many years, and where (beyond obvious tributes like The Simpsons) can we see its influence in pop culture today? 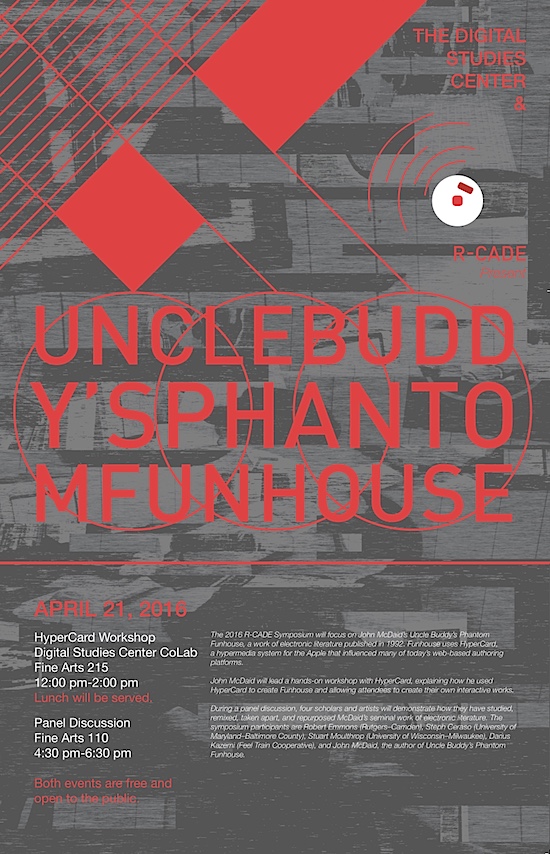 On April 21, my 1993 hypertext novel "Uncle Buddy's Phantom Funhouse" will be the topic of a symposium at Rutgers University. The poster for the event just dropped, and it looks awesome.