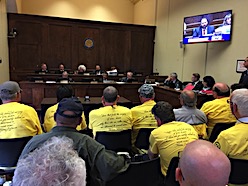 Last night, the RI House Judiciary Committee considered a batch of gun safety bills, and the yellow-shirted Second Amendment Coalition folks packed the rotunda for a 3pm rally ahead of the hearing in Room 101. I was there to testify for the "Safe Schools Act," which would close the loophole allowing concealed carry in Rhode Island schools. I want to thank the members of the committee who stuck around and listened attentively to all sides until 10:15 when I was called up to the mic (and I was far from the last one there.) Here's my two-minute testimony, as delivered...

I’m John McDaid from Portsmouth, urging the Committee to support H7591 as a parent and a member of the RI Coalition Against Gun Violence, an organization representing more than 100 groups and 120,000 Rhode Islanders.

RI General Law 11-47-60 already bans concealed weapons on school grounds. All this bill does is clarify that law’s scope.

Concealed weapons present a constant unavoidable risk. According to the CDC, in 2015 there were 17,311 reported unintentional gunshot injuries. That’s 47 firearm accidents every day.

Arguments that permit holders would protect students and staff are deeply suspect. Applicants in Rhode Island only need to put 30 rounds in a 14-inch target at 25 yards every four years. There is no requirement for training in real-world tactical scenarios — or even drawing from concealment — nothing that would prepare them for the complex, high-stress situation of an active shooter. Or for shooting a child.

Even in the hands of trained professionals, friendly fire and collateral damage are significant risks. According to a RAND corporation study, trained police officers only hit their targets roughly 30% of the time; in an active firefight, that number dropped to 18%. Adding more guns in the hands of the untrained in crowded school rooms and hallways is not a move in a safer direction.

Finally, the General Assembly has the power to address this. Even the Supreme Court’s Heller decision, which is extremely favorable to Second Amendment rights, specifically says, “nothing in our opinion should be taken to cast doubt on…laws forbidding the carrying of firearms in sensitive places such as schools.”

Sen. Jim Seveney (D-11) will host a constituent meeting next Sunday, July 16 at Foodworks Restaurant, 2461 East Main Rd. in Portsmouth from 1:30-3pm, according to an e-mail sent this afternoon. Sen. Seveney's district includes all of Portsmouth, southern Bristol, and an area of Tiverton near the bridge.

Seveney says in the e-mail, "Needless to say, some major pieces of legislation, including the FY 2018 state budget, are in limbo and awaiting final completion. Hopefully we'll reconvene soon to finish the work left undone on Friday, June 30th.

"Come anytime between 1:30 - 3:00pm to discuss issues, expectations and the latest status on legislation of interest. I'll also share my experiences and insights gained as a first term state senator. I invite you to stop by and let me know what you're thinking."

Meeting is free and open to the public. Coffee and light snacks will be available.

Editorial note: Written from an e-mail.