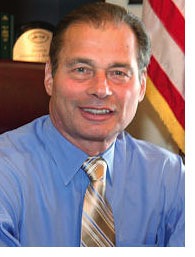 As President of the Rhode Island State Senate, I have a responsibility to ensure we pass a balanced and sustainable budget for the state of Rhode Island. The budget adopted by the House of Representatives did not protect the state’s rainy day fund from Speaker Mattiello’s car tax phase-out in the event of a future recession or cuts to federal aid.

Last Friday, the Senate unanimously approved amending the budget to include a critical safeguard that suspends the car tax phase-out if state revenues can no longer support the plan. Without the safeguard, the state would have to tap into the rainy day fund, which I will not support. The Senate previously discussed this safeguard during budget negotiations and Senate Finance Committee hearings.

This safeguard was the only amendment to the budget. The Speaker’s car tax plan otherwise remains untouched, and not one dollar was changed in the $9.2 billion budget. I have great respect for the Speaker and his passion for reducing the car tax, but no one individual in the General Assembly has the authority to dictate what will or will not be in the budget. The Senate made this corrective action to protect taxpayers. Tapping into the rainy day fund could harm the state’s bond rating and our overall fiscal health.

No one, not even the Speaker, wants to see this phase-out succeed more than I. The two communities I serve – Providence and North Providence – pay among the highest rates in the state. However, Rhode Island has a long and tortured history in its efforts to phase out the car tax. At one point, the General Assembly repealed a similar plan because of declining state revenues. I will not repeat that mistake. Taxpayers deserve predicable and sustainable tax relief.

After we amended the budget last Friday, the Senate remained in session and passed legislation to improve the quality of life of all Rhode Islanders. When the Speaker abruptly recessed the House, not only did he leave the budget unfinished – which includes his car tax plan with our safeguards – he also walked away from critical pieces of legislation. These include measures to provide paid sick leave to Rhode Island workers, take guns out of the hands of domestic abusers, and codify important provisions of the Affordable Care Act into state law.

We encourage the Speaker to reconvene the House to take up these matters. In the meantime, the Senate will thoroughly review all legislation that comes before us and pass that which we deem is in the best interest of all Rhode Islanders.

Dominick J. Ruggerio is President of the Rhode Island Senate. He is a Democrat that represents District 4, Providence and North Providence.

In recent years, it has become common to walk out my front door near Newport’s waterfront in the historic Point neighborhood during a storm and see several inches of water surging up the road. For some, the challenges caused by sea rise and flooding still seem hypothetical, but for me and the hundreds of other neighbors and businesses in my district, the issue is on our doorsteps — sometimes over them.

While Rhode Island possesses the research and intellectual capital to tackle sea-level rise, I witnessed a communication divide between those studying the issue, stakeholders affected by it and leaders capable of addressing it. For that reason, one of my first priorities upon my election to the House was to sponsor the creation of a commission to study and bring attention to the economic risks that sea rise and flooding pose to our state.

The commission, whose members hail from real estate, hospitality and tourism, academia, science and public policy, worked for six months, conducting case studies on the Providence Port, the Newport waterfront and the Westerly beachfront, and listening to municipal, state, and regional experts.

What we found was that businesses from beachside restaurants in Westerly to marine shipping corporations in Providence are beginning to understand the threat of sea level rise and conceptualize solutions, but we still have much work to do to ensure the Ocean State adequately adapts. In the end, the state must adopt a philosophical approach to meeting adaptation goals that embrace the broader aim of protecting Rhode Island’s overall economy from flooding and rising waters.

Toward that end, I have introduced legislation requiring continuing training on sea rise and flooding for all local zoning and planning boards, to ensure that those who have the front-line duties of determining whether, where and how we build our communities have the information and tools to ensure new development and redevelopment is built with an eye toward protecting assets from rising sea levels, which also affect inland and riverene municipalities. This is quite possibly one of the most critically important things we can do to protect public and private assets, as well as lives and livelihoods, from flooding. Empowering local planners to recognize future risks and require that future development protect against them will do more than protect their investments; it will also help keep insurance costs for all Rhode Island properties from rising rapidly, since high replacement costs and recurring disasters increase insurers’ costs, and property-holders’ rates. The insurance industry should embrace my efforts to prepare for future risk.

I am also working to design a flood audit program similar to the existing free energy audit program offered by RISE Engineering through National Grid. While this legislation may not be ready in time for passage this session, helping businesses and residential property owners in the flood plain understand and mitigate their own risks was one of the recommendations of our commission.

At the commission’s request, the Department of Business Regulation is also considering regulatory training for real estate agents on sea rise and flooding as part of their continuing education requirements as a means for making improvements to existing properties when they hit the market to ensure their protection from flooding, and helping agents protect Rhode Island buyers from making risky investments.

Our study commission learned many important things about our fragile coast, but mainly we learned that there is a high cost to doing nothing. A do-nothing approach will likely cause insurance premiums to increase and homes and businesses to flood near and far from our 400 miles of coastline.

It is cheaper to act now.

Rhode Island is prepared to do that because of well-defined regulations, strong risk-assessment tools, and effective cooperation between the government, academia and the private sector.
We can project Rhode Island as a leader in the region for taking steps to ensure minimal property damage and business interruption costs and loss of value due to sea rise, sea surge and flooding.