The Portsmouth Water and Fire District holds its annual election of officers today — Wednesday, June 10 — at the District main office at 1944 East Main Road, and everyone who is a ratepayer in the district can vote. Polls open at 7am and close at 8pm.

I urge everyone to take a few minutes out of your day to stop by and vote.

The Portsmouth Water and Fire District holds its annual election of officers on Wednesday, June 10 at the District main office at 1944 East Main Road, and everyone who is a ratepayer in the district can vote. Polls open at 7am and close at 8pm.

This year, four positions are up for election -- one Tax Collector, one Treasurer, and two Tax Assessors. All four races are uncontested, with incumbents running for re-election.

As I remind people every year, this is one of those rare elections where write-ins can (and, in the past, have) resulted in upsets, so I urge everyone to take a few minutes out of your day to stop by and vote. I'll remind you.

Portsmouth customers have already seen an improvement in water quality courtesy of new treatment plants, according to a news release from the Portsmouth Water and Fire District.

Quarterly water samples collected from February 2014 through November 2014 indicate that the Portsmouth Water and Fire District is in compliance with the state and federal regulations for Total Trihalomethanes (TTHMs). TTHM compliance is measured as a four-quarter, running annual average of four sample sites within a water distribution system and the EPA maximum level for TTHMs is 80.0 parts per billion. The TTHM four quarter, running annual average for the District’s most recent compliance period was 71.8 parts per billion.

In September of 2014, the District issued a news release and mailed a notice to customers indicating that it had exceeded the TTHM regulations. That excedance was based on the four-quarter running annual average of 89.2 parts per billion for the period of November 2013 through August 2014. The most recent quarterly testing in November 2014 resulted in a TTHM average for the quarter of 24.6 parts per billion, which brought the District’s four-quarter, running annual average into compliance.

William J. McGlinn, the General Manager and Chief Engineer for the District, indicated that construction of the new Lawton Valley Water Treatment Plant in Portsmouth and the renovation of the Station One Water Treatment Plant in Newport made an immediate difference in the TTHM levels for Portsmouth Water, Newport Water and the Navy – the three island water suppliers. The water treatment plants project was constructed by the City of Newport and both plants were put on-line in the second half of 2014. Due to the challenging water quality of the City of Newport’s nine reservoirs, Advanced Water Treatment processes have been incorporated into the two water treatment plants in order to assure compliance with drinking water standards, particularly the TTHM standards. The total project cost is $84 million, which is being funded for through the water rates of all water users on the island.

Update, 1/22/15 5:16pm: An earlier version of this story included an incorrect expansion of the acronym "TTHM." It stands for Total Trihalomethanes, rather than just "Trihalomethanes." This error was present in the press release from the Portsmouth Water and Fire District, and was pointed out by a reader. My apologies for letting this slip through.

The Portsmouth Water and Fire District will be doing water main work on Boyd Lane on the southeast side of the Rt. 24 northbound off ramp today and tomorrow from 7:30am, according to a release. Boyd Lane traffic will be shifted into two narrow lanes, and motorists are advised that there may be delays, especially during morning and evening commutes.

The Portsmouth Water and Fire District will be flushing water mains in the southern sections of Portsmouth next week from 8pm to 6am, according to a schedule they announced today:

The PWFD goes on to advise customers:

Discoloration of the water is expected during and after the flushing. Flushing in one area may create discolored water in other areas. Customers are advised to avoid washing clothes and those with hot water tanks are advised to avoid drawing hot water during the flushing hours and until any discoloration has cleared. It is expected that the water will clear by midday after the flushing. Customers may also experience low water pressure during the flushing. This schedule is subject to weather conditions or other unforeseen circumstances.

The Portsmouth Water and Fire District will be flushing water mains in the north end of town next week from 8pm to 4am, according to a schedule they announced today:

The PWFD goes on to advise customers:

Water supplied to Portsmouth residents has exceeded the federal EPA standard for trihalomethanes (TTHMs) for the past year, according to a statement released to media today by the Portsmouth Water and Fire District (PWFD). The EPA standard is 80 parts per billion (ppb) for an annual running average, and the Portsmouth water came in at 89.2 ppb.

TTHMs, according to the EPA web site, are "a group of four chemicals that are formed along with other disinfection byproducts when chlorine or other disinfectants used to control microbial contaminants in drinking water react with naturally occurring organic and inorganic matter in water."

According to PWFD, the level does not constitute an emergency and no action by customers is required, but it has triggered a notification requirement. PWFD customers will receive notice by mail from the district within the next month.

The new water treatment plant under construction on West Main Road will incorporate advanced processes to ensure compliance with drinking water standards, the PWFD said, and is scheduled to become operational before the end of the year.

Read more about TTHMs on the EPA site, or download the full press release here. 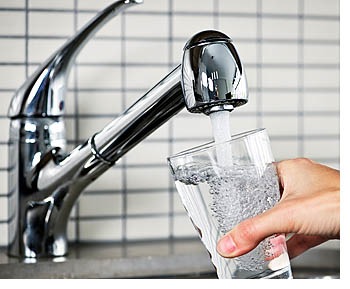 The CCR, which is required of all public water suppliers by the Federal Safe Drinking Water Act, summarizes the District’s water sources and provides information on regulated and unregulated contaminants in the water. The CCR also provides important health information on drinking water, including bottled water, particularly for those people that may be immunocompromised.

The CCR also provides health information about specific water quality issues and indicates that the District continues to experience high levels of Total Trihalomethanes (TTHMs), which are a by-product of drinking water chlorination and are a suspected carcinogen. The CCR shows that in 2013 the District’s highest four-quarter Running Annual Average TTHM level was 96.3 parts per billion (ppb), which is above the EPA Maximum Contaminant Level of 80.0 ppb. The range of TTHMs measured in the distribution system was 21.5 to 134 ppb.

TTHMs are an on-going concern for the District, Newport Water and the Navy, as all three island water suppliers are distributing the same treated water. The CCR indicates that the City of Newport has awarded a design-build contract for the construction of a new Lawton Valley Treatment Plant in Portsmouth and improvements to the Station 1 Treatment Plant in Newport. The total project cost is $84 million. Due to the challenging water quality of the City of Newport’s nine reservoirs, Advanced Water Treatment processes are incorporated into the improvements at each plant in order to assure compliance with drinking water standards, particularly TTHM standards. The plants are scheduled to be operational before the end of 2014. All water users on the island will pay for these improvements through increased water rates.

Copies of the report are available at the District’s main office at 1944 East Main Road and the Portsmouth Free Public Library. The report is also available on the Internet at portsmouthwater.org.

Customers with questions on the report or about water quality in general are encouraged to call the District’s office at 683-2090.

Portsmouth Water and Fire District customers can now pay their water bills online using the District’s new web payment portal, according to a release from the District. Payments can be made through a recurring credit or debit card payment or a recurring electronic draft from a checking account. In addition, customers can make a one-time credit card or debit card payment for a particular bill.

Customers can also use the web portal to look-up their payment and water usage history and to view their latest bill. Customers can select to have their water bills emailed to them rather than receiving a paper bill.

According to Administrative Board Chairman, Philip T. Driscoll, there are no charges to the customer for making payments through the District’s web portal. Driscoll indicated that the Board is trying to make it easier and “greener” for customers to receive and pay their water bills. In addition, Driscoll stated that the District is trying to encourage customers to pay electronically to reduce the additional foot traffic that is expected at the office with the switch to quarterly water billing.

The web portal will also be available to make payments for Water District Property Tax bills beginning in October of 2014.

The web portal can be accessed through the District’s website at PortsmouthWater.org by clicking on the “Pay My Bill” button near the top of the home page. Customers will be prompted to create an online account, which will require the account number from their water bill.

Customers can also sign-up for recurring payments and use a credit card for payment at the District office.