Interviewed at the transfer station this morning about his use of the Portsmouth 375 logo in his campaign signs, Town Council candidate David Gleason defended his use of the mark as "recycling," and asked this reporter if I would "give him money for new signs."

He asked if I would take a statement, and I recorded the following, reproduced verbatim:

"It's been pointed out that I'm re-using the 375th material for my signage. All I want to say is that I'm running a low-budget campaign this year, I'm recycling my literature from 2012, and those signs I purchased in November of 2013 to honor old houses in town and I've just put my logo on them, it was never meant as any more than just recycling materials to run a low-budget campaign. If people want to vote for me, then that would be great. But I just don't have the money. I've spent all the money I've made as a Councilor on projects around town, and I'm hoping people see that for what it's worth, and I'm a recycler at heart. That's the bottom line for me."

Asked how he would respond to those who would say that he was taking a non-partisan logo developed as a public good for the town and degrading it by using it in a partisan fashion for his own personal gain, Gleason responded:

"I would say I never thought about that when I put those signs out, nor do I think it's an issue at this point. Actually, if you look at the sign, it'll say '375 plus one' so I'm just carrying on the tradition honoring Portsmouth history."

Editorial note: Mr. Gleason made the accusation, during the interview, that this was partisan. Let me be very clear. When I post something because I'm a Democrat, I mention that if it's not blatantly obvious from the context. I'm pissed off about this because this was the logo for our Town's 375th anniversary, and he's using it as a campaign prop. What you are hearing right now is not faux partisan outrage; I'm personally offended and personally angry.

At least two signs for Independent Town Council candidate David Gleason contain the official logo used by Portsmouth for its 375th anniversary celebration. The signs — located on West Main Road and Union and on Park Ave next to the landfill — appear to have been made by attaching a Gleason campaign message to existing Portsmouth 375 signage.

I sent the following e-mail to the co-chairs of the Portsmouth 375 Committee, the Town Administrator, and the Town Council, cc'ing local media.

This beautiful, award-winning logo was developed by Roskelly, Inc. as a non-partisan representation of our town, and it was intended to celebrate our whole community, as its use in many communications and official materials over the past years attest.

Using it in political advertising degrades the brand equity of this mark and does irrevocable damage to this important symbol. I'm publicly calling on Mr. Gleason to remove this from his signs, and I urge Portsmouth's Council and administration to support this position.

Full disclosure: There's not much in politics that makes me lose my cool. Most of the time, I can just accept that, hey, sketchy stuff happens. But this is different. Roskelly did such a beautiful, poetic mark for the Town's 375th anniversary celebration that it makes me really angry to see it reduced to political signage. 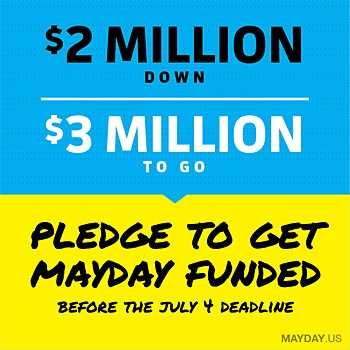 Mayday.us announced today that they've hit $2M in pledges to the "SuperPAC to end all SuperPACs." This grassroots, kick-started experiment in restoring democracy is the brainchild of Harvard Law professor and activist Larry Lessig, and the goal is to raise enough citizen contributions to put some muscle into 2014 races as a proof of concept -- the concept that Americans care about campaign finance reform, and that Congress needs to treat this as a serious issue.

I'm asking you to pitch in if you can. You can pledge on my page at MAYDAY.US.

Still need some convincing? Listen to Joseph Gordon-Levitt (Remember -- Friday, July 4 is the deadline. Don't wait for the kick...) 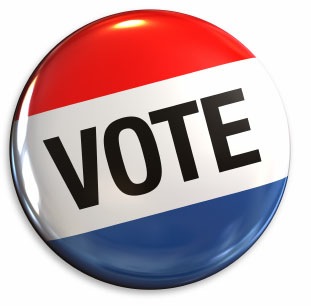 The Portsmouth Water and Fire District will hold its annual election of officers on Wednesday, June 11, 2014 at the District's main office at 1944 East Main Road. The polls will open at 7:00 AM and close at 8:00 PM.

Of the Board's seven seats, the positions of one (1) Water Commissioner and one (1) Clerk are up for election.

Running for the position of Water Commissioner is incumbent Terri-Denise Cortvriend of 46 Mary Lane.

Commentary
Just because you only see one candidate for each position, please don't assume that these races will be uncontested. Turnout is typically in the low hundreds for these elections (to a quasi-governmental body with taxing power) and it is possible for undeclared candidates to succeed on a write in. In fact, this has actually happened in Portsmouth Water Board elections. If you're a ratepayer in the District, I urge you to get out to the polls on June 11. Don't worry -- I'll remind you.

Editorial note: The news section, before the commentary, is written from a press release.

According to an e-mail this morning from the Town Clerk, the swearing in of Portsmouth's new Town Council and School Committee will take place next Monday, November 26 at 7pm in Town Hall.

The Portsmouth Girl Scouts will conduct the flag ceremony, followed by an invocation by Father Gray. The new elects will be sworn in by the Honorable J. Terence Houlihan, Jr., State of Rhode Island District Court Associate Justice.

Hope to see you there!

Today's three-hour recount process at the RI Board of Elections (BoE) left the results of the Portsmouth Town Council race unchanged, as Liz Pedro (R) maintained a one-vote lead over next place finisher Len Katzman (D). At the end of the day, Pedro won by a count of 3791 to 3790 for Katzman.

"I congratulate Ms. Pedro on a good race and wish her well on the council," Katzman said in a statement sent to media late this afternoon. "I want to thank all those who voted for me, and thanks are due as well to the Portsmouth Democratic Party for their support of my candidacy. I am exceptionally pleased that Portsmouth Democrats won a controlling number of seats on the Town Council and accomplished a complete sweep of the School Committee races. Although I had hoped to serve alongside them, I am very satisfied with the overall result of the Portsmouth election. I wish all newly-elected Portsmouth officeholders the best as they take on the challenges of government for the next two years."

The recount process went smoothly, as the Portsmouth Canvassing team, led by Madeline Pencak, were assisted by BoE staffers in referring ballots through a half-dozen readers. Machines conducted most of the tally, with a handful of ballots from each district that had to be reviewed by a two-member panel of the Board of Elections. The entire process was supervised by Executive Director Robert Kando, who was was called on in at least one case to review a ballot.

Notable in the recount process were the ballots rejected for overvotes in the 4-year School Committee race, where a number of voters had marked four names.

Portsmouth Town Council candidate Leonard Katzman (D), who was edged out in Tuesday's election by 3 votes, has filed a recount request with the RI Board of Elections, according to a statement received this afternoon by harddeadlines:

"At about 1 p.m. today I filed a formal request for a recount in the Portsmouth Town Council race. As of the final tally of the race, including paper ballots, I trail the last winning candidate by only three votes.

I believe that our optical scanner voting system is very robust and accurate and therefore I do not expect the recount to result in any major change in outcome. Nonetheless, on occasion some variance does occur. I have been contacted by many Portsmouth citizens and they have urged me to seek a recount. I believe I owe it to my supporters to do so. This will allow Portsmouth voters to remain confident in the integrity of the election process.

Regardless of the outcome, I want to thank all who supported my candidacy. Thanks are also due to the Canvasser’s Office for a well-run election."

Full disclosure: I serve on the Portsmouth Democratic Town Committee.

The RI Board of Elections web site was finally updated with mail ballots from Tuesday's election and the good news has held for the Portsmouth Town Council and School Committee: a solid Democratic majority on both.

And congratulations to Linda Finn (72) (who beat Dan Reilly), Dennis Canario (71) and Ray Gallison (69) who were unopposed, and Jay Edwards (70)

Depending on your district, you will also be able to vote for Democrats for State Representative: Linda Finn (72), Dennis Canario (71), Jay Edwards (70), and Ray Gallison (69).

You can check on your polling place and get a sample ballot at the Secretary of State's Voter Information Center.

Hope to see you at the polls! (And remember to bring ID!)

Full disclosure: I am a member of the Portsmouth Democratic Town Committee.

Portsmouth school committee candidates Terri Cortvriend, John Wojichowski, Andrew Kelly, and Emily Copeland were at the Middle School this morning. Please support this team tomorrow -- they will be there for our schools *every* day.