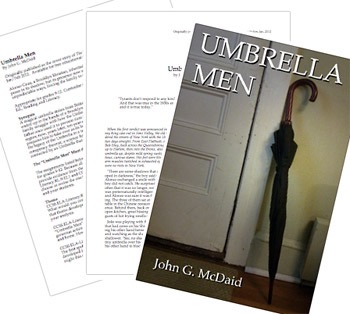 I was delighted to take part yesterday in a workshop with local authors and teachers on writing and the Common Core State Standards sponsored by the East Bay Educational Collaborative and the Association of Rhode Island Authors (ARIA). As part of the preparation for that workshop, Karen (who has her M.S. Ed. in Reading and Literacy) put together a study guide for high school teachers for my most recent short story, "Umbrella Men," with assignments aligned to the CCSS. I showed the materials to teachers at the workshop and got some good feedback.

To try to make this a helpful package for educators, I've created a printable PDF of the story with line numbers to facilitate reference, and a educator's epub version to make it easy to download and read (which could also be used by students, if you don't care about the numbering.)

It's all available for free under a Creative Commons license over on a new page for educational materials. If you're an educator, and have any questions, please feel free to contact me.

Oh, and if you want a chance to meet some of Rhode Island's great local writers and check out their work, ARIA hosting the second annual Authors Expo on November 8 — more info on the web site.

Twenty-five years ago today, Karen and I were married, in a ritual we wrote ourselves, outdoors under the trees of the beautiful Albright University campus in Reading, PA. No words can possibly capture what that day, or all the wonderful years together since, have meant, or the unbounded delight of sharing parenthood of our amazing son, Jack.

On our wedding day, we had our first dance together as a married couple to a song by the Talking Heads, "Dream Operator."

And every dream tells it all
And this dream is your story
You dreamed me a heart
You're the dream operator...

BoingBoing, one of the web's leading technology and culture sites, posted a "hyperlocal news manifesto" on Sunday, April 29, and mentioned harddeadlines.com. In the post, BoingBoing editor Cory Doctorow says "For more top-notch, independent hyper-local news see John McDaid's blog." Doctorow adds, "It's clear that this sort of reporting makes a real, on the ground difference for the communities it serves."

This is not harddeadlines' first appearance on BoingBoing: In March 2012, the site picked up a post deconstructing a campaign ad by GOP Senate candidate Barry Hinckley.

A big howdy to any first-time visitors! This site has covered Portsmouth news and politics since September, 2006 (take a peek at the archives), and was named one of the best US local politics blogs in January, 2012 by Stateside Associates.

Editorial note I'm totally chuffed to be mentioned by BoingBoing as an example of good hyperlocal reporting. I share Cory Doctorow's belief that citizen journalism has an important role to play in our communities, and I'm glad to be able to contribute here in Portsmouth.

Stateside Associates, a government relations consulting firm, has named Portsmouth's harddeadlines.com to its list of the best local politics blogs around the country, according to a press release distributed today.

The 74 blogs on the list run the gamut from sole props like mine to the politics blogs of newspapers like Gannett's Cincinnati.com. (Yes, I did google for secondary pickup to see if it was a linkbait scam. If your mother says she loves you, check it out.)

In Stateside's companion guide to the best State-level politics blogs, Ted Nesi and the ProJo Politics blog both got the thumbs-up.

As I said to their representative when he contacted me this evening by e-mail, I'm delighted that people find my coverage useful, and appreciate the recognition and exposure.

Editorial note: Written substantially from a press release. This was unsolicited, and I had no knowledge of this, nor contact with anyone at Stateside Associates prior to this evening.

Long-time readers will agree I rarely venture into the self-revelatory navel-gazing critics bemoan in the blogosphere. But when I got together with folks over the recent holiday, there was a certain amount of tap dancing about food options; hence, this post. If you don't care, please move on. Nothing to see here. kthnxbai.

Since January, I've been an ovo-lacto vegetarian, which basically means not eating anything that requires the death of an animal. There are three ways to explain my decision, depending on how you choose to view causation.

The proximate cause was an episode of the Discovery Channel show, Dirty Jobs, called "Custom Meat Processor" that I watched — briefly — in December. Yes, I have known intellectually for a long time where meat comes from. But, for me, it was quite a different experience to hear a TV host shoot a cow in the head and then chop it up. You don't want to click on that link if you're squeamish. Trust me.

The concurrent cause (what lawyers like to call the "but for" test) centers on health impacts. Humans are unquestionably apex predators, and almost certainly evolved as opportunistic carnivores. There is evidence to suggest that we hunted game and ate lots of meat as far back as 500K BCE, but, arguably, that was for nutrient density and protein, needs we can now meet in other ways. While my cholesterol numbers are actually fine, why push my luck. Not to mention zoonotic diseases (cough...BSE...cough). And then, of course, there are the second-order health impacts: hog waste lagoons, factory chicken farms, and the overall environmental degradation from the intense natural resource requirements of producing meat.

However, the ultimate cause, as one might expect, is philosophical, with roots going back to my undergraduate days. While my default mode is pragmatic phenomenology (in which I received dharma transmission in the lineage of C. I. Lewis from Prof. Fernando Molina), I began a long journey to the East in a class with Agehenanda Bharati. So while I was in Molina's seminar — with one other student; impossible to hide — reading The Critique of Pure Reason, I was also studying koans and sloshing around in the cosmic overwhelm of the Tibetan Book of the Dead.

And there is a point, believe it or not, where they come together. Buddhism, as Paddy Chayefsky noted in Altered States, is not a religion, but rather "a state-specific technology operating in service of an a priori belief system." That's something a phenomenologist can get behind, and I was deeply attracted to Zen long before I had one of those peak moments sitting at the dry garden of the Ryoan-ji temple in Kyoto in 1996.

But although I could recite the four vows, I obviously could not commit to "liberating all sentient beings" as long as I was...well...eating them. (Imagine it in LOLCat: "Mouse said, 'wait I haz Buddha nature,' but I eated him.")

So I've been vegetarian since January, and haven't missed anything. Oh, there are minor annoyances, like the afternoon onshore breeze that brings kitchen smells up the street from Flo's Clam Shack, but the most difficult thing has actually been having to repeatedly explain, one-off, why I'm no longer scarfing down cheeseburgers and scrapple. Hence, this post. Thanks for listening.

Editorial note: As may be obvious, I struggled over this, and have probably said either too much or not enough. Both the Principia and Alfred Korzybski warn about the impossibility of capturing reality with language. But I guess that's my job as a writer. Mu.

Moved permanently to Portsmouth. I had just left academia (the first page of the black-and white composition notebook I started on this date in 1991 has the mangled "Faculty" bumper sticker from the NY Institute of Technology unceremoniously plastered on the front cover) and I took the summer off to write, which seems an unimaginable luxury now. My first step was getting a driver's license, a library card, and stopping by Town Hall, which in those days, I think was next to "The Mac Shop" in the shopping plaza with Tak Pao City.

I still have the official Town welcome packet in my notebook, a blurry multi-generation xerox signed by Robert Driscoll and Carol Zinno. "We are pleased that you have chosen Portsmouth to make your home. Though we are the smallest community in population on Aquidneck Island, we like to feel we have a big heart, as big as any community anywhere."

Hurricane Bob and the coup in Russia were lurking, unforeseen, in the near future. But I was just enjoying this charming house where my grandparents had lived and my mother grew up, and discovering this wonderful town that is now our home.