Folk or filk, you decide. Read about and download tunes, or check out some of the lyrics. 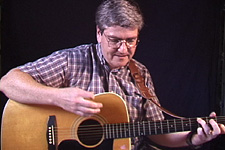 "A mischeivious guitarist and vocalist with a gift for the inimitable phrase."
— The New York Times

Okay, so the Times review was talking about the audiotapes included in my hypertext novel, published in 1993 by Eastgate Systems. I've been playing acoustic guitar for 40 years, and have written more than 100 songs — some of which I still perform :). Back in the 1980s in NYC, I had the opportunity to play a Sunday Songwriter feature at the legendary Folk City, and opened for Hugh Blumenfeld at the Speakeasy. In the years since, while holding down a full-time corporate job, I've played a bit at a few sf cons, and with co-conspirator Bill Bly, have recorded (and performed at academic conferences) what might be best called "media theory filk." In January, 2016, I retired early and began getting back to doing creative work...

The year started off with a bang: a feature slot at Sandywoods on Jan 14, followed by performances at the Sandywoods kickoff of Michelle McGaw's state rep campaign, and an RI for Elizabeth Warren event at the Trinity Brewpub on January 27.

A lot of "away games" in 2019, including my first international concerts — and another two songwriting contest prizes (Ohio Valley Filk Fest in October, where I took third prize, and FilKONtario in March where I won second place.)

But the highlight of the year was a featured concert performance at the World Science Fiction Convention in Dublin, Ireland. Of course, there'a a clip.

In preparation for Dublin, I put together my first album in (mumble) years...

Had a wonderful time in April at my first international concert — a performance at Toronto's FilKONtario sf music convention. While I was there, I won second prize in the topical songwriting competition (theme: Cosmic Hotels) with my song "Check Out Time at the Owl Creek Hotel." (Audio to follow Real Soon Now...) as well as third place in the deadline songwriting competition, where entrants had to crank out a song in two days including the words penguin, tiger, flit, constellation, and staff.

In February, I attempted my first "February Album Writing Month," (FAWM, for short) and although I didn't *quite* hit the target of 14 songs in 28 days, I did manage to finish 8, one of which I've already included in my setlists. Several others will need some polish. And a couple, well, that's what the blue tarp out behind the barn is for. You can see (and hear) some of them over at the FAWM web site.

The year started with two great science fiction music situations. It was my first time at Gafilk, in Atlanta, and I had a blast playing and hanging out with this wonderful community. Then it's off to my "home con" of Arisia, whose new leadership has worked to fix serious problems.

The new year also brought the beautifully edited multicam of last Fall's New England Songwriters Retreat (thanks, Joe Del'Orfano!) where I did "Time (Welcome To My Nightmare)."

In January, I was the feature at the wonderful open mic at the Pub on Park in Cranston. In February, I did a songwriters in the round at the Hearing Room in Lowell, Ma with Amy Kucharik and Tom Smith. On March 11, I had the opportunity to perform at the kickoff of Terri Cortvriend's campaign for state representative.

I was honored to play at the March 16 Rhode Island Songwriters Association (RISA) semi-annual showcase at Sandywoods, with Lainey Dione, Kim Moberg, and Terry Kitchen, and in May at the RISA annual Songwriters in the Round at the Mediator Stage. July was a big travel month, as I headed out to Pittsburgh to play a featured concert at the Confluence science fiction convention there. In September, just over in Connecticut, was a fabulous evening at the New Morning Market Songwriters Series where people clapped and sang along with my fortune-cookie campfire song.

In October, I traveled to Columbus, Ohio for the Ohio Valley Filk Fest, one of the largest filk conventions. Got to listen to amazing musicians, attend the Pegasus Award banquet, and participate the two songwriting contests. The first was for songs on the theme "Something Wicked This Way Comes," written during the prior year. The second, called the "Iron Filker," required participants to write a song on the theme announced Friday night of the con, to be performed on Sunday. This year's theme was "Welcome To My Nightmare."

I won both contests with these songs...

Had a fantastic time playing a feature slot at the regional filk con Contata in June, where I met some wonderful folks and spent many late nights in the open filk. Then had the opportunity to participate in the New England Songwriters Retreat in August, which was a transformative, kick-in-the-ass experience. I wrote two songs over the weekend, one of which is a campfire call-and-response tune about the financial crisis based on a fortune cookie...

Tthe year started off with open mic feature spots at Church Street Coffeehouse (1/27) and Sandywoods (1/31), followed by a Rhode Island Songwriters Association "Saturday Songwriters" session at Brooklyn Coffee & Tea (2/4). The following week, I did a RISA "Songwriters in the Round" at AS220 (2/8), and a feature spot at Sandywoods on 4/25. There's a ReverbNation page where you can find upcoming gigs.

Here's a couple of videos from the Sandywood gig -- "Nevermore," with Biran Burns sitting in on djembe.

Here's a video of me performing "That's Trump" at the Resist Hate RI meeting on Feb 25. Thanks to Steve Ahlquist for the video.

If you've been at any of the open mikes, here are a couple of the songs you probably heard..

In November, I started doing some open mikes and getting things up to performance level again. I've got a ReverbNation page where you can find upcoming gigs.

As part of the Newport Bridgefest week of local musicians, I played a few tunes in the "Busking @ Bowen's Wharf" event on Monday, July 27, 2105. Here's a link to some of the songs I played.
Visit the BridgeFest2015 page »

Bill Bly and I recorded a CD of media-theory-themed tunes, some drawn from his colleagues in a band Left Field. You can e-mail Bill at Infomonger for info on hardcopy, or download MP3s from here.
Visit the Media Ecology Unplugged page »

What the fark is filk? Read more in Wikipedia.