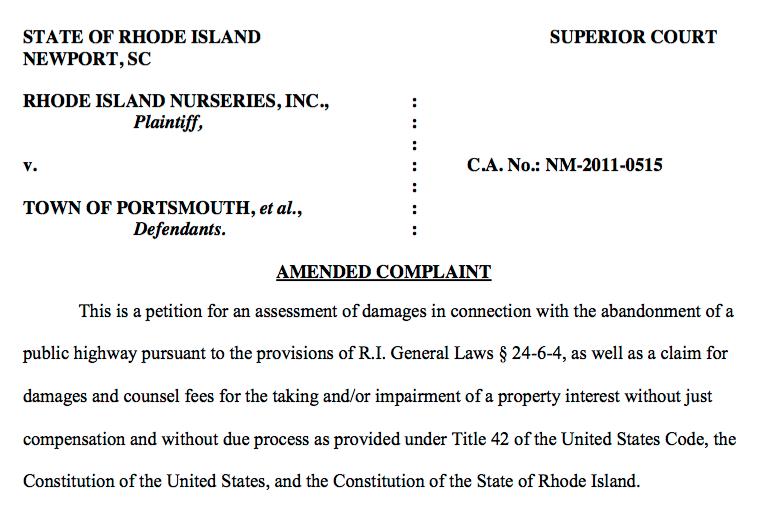 At last night’s executive session meeting, the Portsmouth Town Council unanimously approved a settlement agreement with the plaintiff, R.I. Nurseries, Inc., in the litigation resulting from the Town Council’s 2011 abandonment of the “paper” public road known as the “Heidi Drive Extension,” the town announced in a statement today. In exchange for a release of liability and dismissal with prejudice of all claims against the Town of Portsmouth and the members of the 2011 Town Council, R.I. Nurseries will receive a settlement payment from the Town in the amount of $800,000.

In 2010 the Planning Board granted R.I. Nurseries master plan approval for a 14-lot residential subdivision on its farmland to the north of the alpaca farm known as “Glen Ridge Farm.” At that time, Glen Ridge Farm was part of an existing residential subdivision which included the Heidi Drive Extension. The Planning Board required that the paper road be built as a gravel gated road for emergency access to the new subdivision. The owners of Glen Ridge Farm objected and petitioned the Town Council to abandon the paper road under Rhode Island’s road abandonment statute. The Town Council held a hearing pursuant to the abandonment statute. The Council determined that the paper road had “ceased to be useful to the public,” and voted to abandon the road. The Council also held a hearing under the statute to determine and award the amount of damages that R.I. Nurseries, as an abutter of the public road, would sustain as a result of the abandonment. The Council awarded zero damages to R.I. Nurseries. A decree of abandonment was then entered and the public road became the private property of Glen Ridge Farm.

R.I. Nurseries filed a lawsuit in Newport Superior Court seeking to have its damages assessed by a jury, as provided by the abandonment statute. R.I. Nurseries’ complaint also alleged a violation of its constitutional rights to due process and other claims against the Town. R.I. Nurseries alleged that as a result of the abandonment it was forced to incur substantial additional costs to construct an alternative second access road as later required by the Planning Board, together with additional cost for permitting, a loss of a portion of its land for building the alternative access road, and a diminution in the value of its new subdivision. It also claimed pre- judgment interest and attorneys’ fees.

Chief Justice Williams stated that “this settlement agreement represents an eminently fair, reasonable and equitable resolution of a long and arduous dispute between these parties, and litigation which has already been pending for more than five years. Both sides were facing an upcoming jury trial in the Superior Court which in all likelihood would have been followed by appeals and cross-appeals to the R.I. Supreme Court, taking several more years to be resolved. By making peace now and putting this ongoing controversy to rest, the Town eliminates a significant risk of higher potential liability to the plaintiff for damages, R.I. Nurseries recovers fair compensation for its loss of access to the Heidi Drive Extension, and both sides avoid the certainty of further acrimony, inconvenience and litigation expense. This is what mediation is all about.”