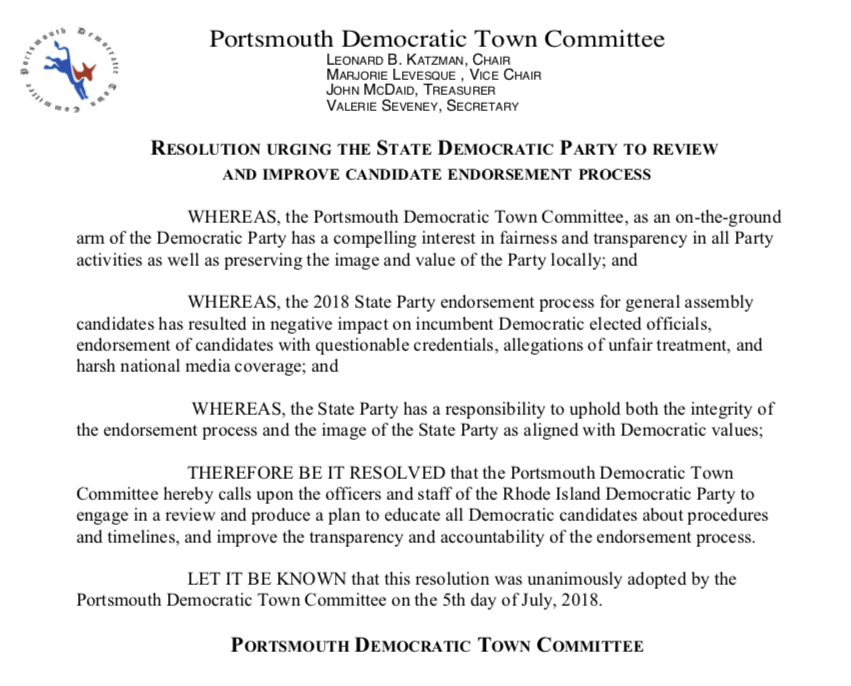 The Portsmouth, RI Democratic Town Committee, at their monthly meeting on July 5, 2018, unanimously adopted a resolution urging the state Democratic Party to review how general assembly candidates are endorsed and create a plan to improve the process.< /p>

"The members of the Town Committee expressed their disappointment in the way endorsements were handled by the State Party in the current election," said Town Committee Chair Len Katzman. "While we are encouraged by the two endorsements which were rescinded on Thursday, we feel that there are systemic issues which still need to be addressed. We want all Democrats to be able to trust the process."

The resolution urges the state committee to craft a plan to proactively educate all Democratic candidates about the procedures and timelines involved in endorsement, as well as taking steps to improved the transparency and accountability of the process.

Full text of the resolution:

WHEREAS, the Portsmouth Democratic Town Committee, as an on-the-ground arm of the Democratic Party has a compelling interest in fairness and transparency in all Party activities as well as preserving the image and value of the Party locally; and

WHEREAS, the 2018 State Party endorsement process for general assembly candidates has resulted in negative impact on incumbent Democratic elected officials, endorsement of candidates with questionable credentials, allegations of unfair treatment, and harsh national media coverage; and

WHEREAS, the State Party has a responsibility to uphold both the integrity of the endorsement process and the image of the State Party as aligned with Democratic values;

THEREFORE BE IT RESOLVED that the Portsmouth Democratic Town Committee hereby calls upon the officers and staff of the Rhode Island Democratic Party to engage in a review and produce a plan to educate all Democratic candidates about procedures and timelines, and improve the transparency and accountability of the endorsement process.

LET IT BE KNOWN that this resolution was unanimously adopted by the Portsmouth Democratic Town Committee on the 5th day of July, 2018.

"The members of the Town Committee are proud Democrats," said Katzman. "We believe that the State Party needs to do whatever is needed to ensure that all Democrats feel confident that the endorsement process has integrity."