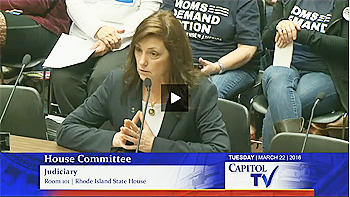 There was a lot of contentious talk at last night's RI House Judiciary hearing on gun safety bills, but one piece of testimony stuck out for me as being particularly chilling. One of the bills, H7199, proposed by Rep. Aaron Regunberg, would limit magazines to 10 rounds. Rep. Sherry Roberts (R-29 Coventry, West Greenwich) offered this response:

"This bill does nothing other than to seek to turn the law-abiding citizen who owns firearms into a criminal. First of all, when legislators take their oath of office, they take an oath to uphold the Constitution. If anything, what we really need is to criminalize those who seek to infringe on the Second Amendment rights guaranteed to individuals both by the US and Rhode Island Constitution, in my opinion. Perhaps it is time to demand that legislators who propose this type of legislation that would defy the Constitution, perhaps we should ask them to forfeit their seat instead."

Transcribed from Capitol TV: Visit the House Judiciary category, click on "House Committee on Judiciary 3-22-16 Part 2" (thumbnail is a guy with a yellow tie). Relevant clip is at 24:39. Or, in the clip below, scroll to 2:49.

Thanks to Steve Ahlquist for the video capture!

It's one thing to pack the state house to try to kill bills in committee. It's quite another thing, in my opinion, for a legislator to suggest that those who propose common-sense gun safety measures lose their seat and become subject to criminal penalties. Of course, this is just my opinion.

Full disclosure: I attended as much of last night's hearing as I could stay awake for as a supporter of the several gun safety bills on the agenda. I have also donated to Rep. Regunberg's campaign precisely because he proposes this kind of legislation. He is not, in my opinion, a criminal.