Book review: "Harvest Night" and the brutal banality of evil 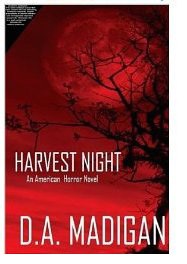 "Harvest Night" by D. A. Madigan is an unremittingly dark, wrenchingly violent horror novel told with considerable skill and in-your-face brio and all the more chilling because, at its core, it is a story about the slow decay of the American century.

A required warning: This is not a book for anyone who finds violence, especially sexual violence, problematic. Madigan recounts with everyday simplicity the horror that follows from the premise of amoral humans who worship the Lords of the Abyss. This is not a gratuitous element, rather, it's integral to the story, but nonetheless, if you find graphic descriptions unacceptable, this is a book best skipped.

Imagine you move to a small town called Redhaven somewhere in the far Northeast, say, perhaps Maine. You expect a few odd local traditions. Like "Harvest Night," the eve of Thanksgiving, where everyone who has moved to town in the past year is invited to play "Hounds and Hares," a harmless game where evading pursuers to means you get a break on your property taxes. It's about becoming part of the community. The Mayor, the Town Council, and the Chief of Police are on board, so it's all good fun.

Anyone who has actually lived in a New England town will recognize this sort of thing instantly (Cabbage Night, anyone?). It's an example of the deeply ingrained traditions that the region passes down, generation to generation. And it's from this point that Madigan begins: what if this tradition was actually a malevolent performative reenactment of an ancient struggle between settlers who had given themselves over to the service of absolute evil and their innocent victims.

What if *everything* in the town was like this. What if beneath the wooden shingles on their saltbox houses, Redhaven is completely run by human monsters? That they are ruthlessly brutalizing and killing their fellow citizens, brainwashing their own children with torture and drugs, and offering human sacrifices to a pantheon of dark Entities. People outwardly normal, yet *purposefully* evil. As the founder of the town puts it one of the chapter epigraphs, "No matter where you are, no matter what time it is, no matter what is going on around you... if you listen closely enough, you can always hear someone, somewhere , screaming in pain. This is the world we live in -- it is a world of pain and s**t and horror and we are only alive in it for a very short time and when we die, we are gone forever. So while you live, do not be one of those whom can be heard screaming everywhere one goes. Be one of those who makes them scream."

Anyone who has moved to a New England town has probably harbored suspicions along these lines too.

Now suppose that there may be something like an immortal vampire in the mix. Not a sparkly one, no, this vampire is utterly inhuman, and its aims may not always be aligned with the other Entities. And yes, there are some "good" folks too. Some accidental (perhaps a youngster or two who have managed to avoid or survive their cultural indoctrination) and a few from outside the town who have infiltrated under deep cover as part of a so-secret-it-doesn't-exist task force on occult criminal conspiracies. To say more would be to give away much of the plot.

Madigan moves the action along a a brisk pace and judiciously deploys the supernatural, keeping the Lords of the Abyss appropriately offstage where they are always scarier. He brings the story to life by taking us inside the heads of a diverse group of POV characters (some who, frankly, you may find utterly repellent) and intercutting tales from the history of Redhaven to frame the action. The stakes Madigan sets up here are high: from the time these demon worshippers took up residence during Colonial days, they have progressively infiltrated government and society, using innumerable small acts of covert terror to bring America to a state of chaotic susceptibility.

And therein lies the harmatia of those who run Redhaven: Even the totally corrupt can be tempted, and the town elders have begun to see their own brutally brainwashed children as a profit center, without regard even for maintaining their own (admittedly twisted and evil) culture. "Redhaven has sold its generational legacy of conscious viciousness in exchange for vast sums of worldly wealth and power, and the adults who currently run this city are the last generation of the volitionally damned that these families will bring into the world."

As Stephen King famously noted, horror is really a displacement of the anxieties and terrors of everyday life. As we read the novel and spend time as inhabitants of Redhaven, we can't help but see in it a mirror of the centers that have failed to hold in American life: the tradeoffs we have willingly made to preserve our "security," the shallow meaninglessness of treasured institutions, the loss of a sense of possibility for the next generation, the hopeless fragility of human relationships, and the ultimate, existential horror:

“There is no battle of Good vs. Evil. That is mythology... no, it is not even that. It is a fairy tale, a childish bed time story that mundane minds chatter to each other. The truth is much simpler –- there is brief existence and endless darkness, and the darkness is always hungry, and in the end, the darkness eats us all.”

For those who can tolerate this level of unblinking bleakness, there is much to appreciate in "Harvest Night."

Required FTC disclosure: I went to Syracuse University with D.A. Madigan and we occasionally hung out at watched movies at the awesome UU Cinema program, but we hadn't talked in 30 years until we ran into each other on Facebook. I received nothing of value in exchange for this review.

Thanks again for the review.

I really appreciate it.