Arisia this weekend (and my schedule) 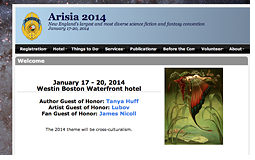 This weekend, Boston hosts Arisia 2014, the region's "largest and most diverse science fiction and fantasy convention." If you've ever been to Arisia, you know what an awesome, something-for-everyone con they run. If not, and you're looking for something fun this weekend, hey, check it out.

If you're there, please drop by the panels I'm on and say hi.

What Does 'Games Are Literature' Mean?
Saturday, 1pm Alcott (3W)
Alan Wexelblat (moderator), James Meickle, John McDaid, Mark "Justin du Coeur" Waks, Emily Lewis
Gamers have spent years defending their genre as a "legitimate" form of "literature" without having a clear sense of what that means, or more than one or two examples. This panel will explore literature in a medium where one or more live people co-create a story - action, characters, challenges, plots, resolutions, adventures - with a game's authoring team. We will focus on titles that go beyond Joseph Campbell's monomythic "hero's journey" by offering more than one person's saga.

Wearable Electronics: Beyond Google Glass
Sunday, 4pm Alcott (3W)
John McDaid (moderator), Percival, David Larochelle, Andrew Van Zandt
Google Glass has premiered with mixed results. What other sorts of wearable computing will be seen in the next few years, and what are some potential ramifications of this technology? Forbes asks the question: what happens when FitBits are implantable? Where is the line between wearable tech and cybernetics?

Looking Forward to Last Thursday
Monday, 10am Faneuil (3W)
John Chu (moderator), Ellen Larson, John McDaid, Justine Graykin, Heather Albano
There have been myriad methods of portraying the time travel story. What specific challenges arise for the writer in portraying conflict and character development in chronologically displaced setting? Are some methods of time travel methods easier to portray and keep consistent than others? What of non-linear story narratives? Is the ending the best place to start? Can a time traveler be anything but an unreliable narrator?

Gonna be a fun time — hope to see ya there!